Transcript from Department of State Newsletter:

Paintings by Black American Artists Are Going to Africa

The Department’s Art in the Embassies Program is sending a group of paintings by Black American artists to Africa. The collection will be exhibited in the US Embassy Residence of Ambassador Beverly Carter in Dar es Salaam Tanzania. It will remain in Africa for at least two years. The paintings were assembled at Ambassador Carter’s request by Mrs. Llewellyn E. Thompson, Director of the Art in the Embassies Program, in cooperation with Adolphus Ealey, Director of The Barnett Aden Gallery and Fine Arts Coordinator of the District of Columbia School System. Through programs of this kind, the Department hopes to further the exposure of Afro American art abroad. Mr. Ealey believes that it is necessary that Afro American artists direct their art towards a world culture instead of limiting its circulation to the United States. Commenting on the collection, Mr. Ealey said,

“The artists on exhibit vary in period and styles as well as age and techniques. Each work comprehends various and sundry experiences and modes of expressions. They offer no cause to plead or interest to serve only to translate in visual form the shared emotions and ideas basic to all mankind.”

AT PREVlEW: Mrs. William P. Rogers (right) chats with artists Adolphus Ealey (left) and Alma Thomas at a preview of the paintings by Black American artists which will be sent to Africa by the Arts in the Embassies Program. EXHIBIT Among the paintings presented in the collection are left to right Rose of Charm (oil) by Laura Wheeler Waring, Maine Island (oil) by David Driskell (below), Peasants on Parade Haiti (oil) by Lois Jones, Guardian of the Shore (oil) by Delilah W. Pierce, Liberation (silk screen) by Lloyd McNeill Jr., untitled abstract by Carroll Sockwell (below) and Snoopy Sees A Glimpse of Jupiter (an acrylic) by Alma Thomas. APRIL 1973 45 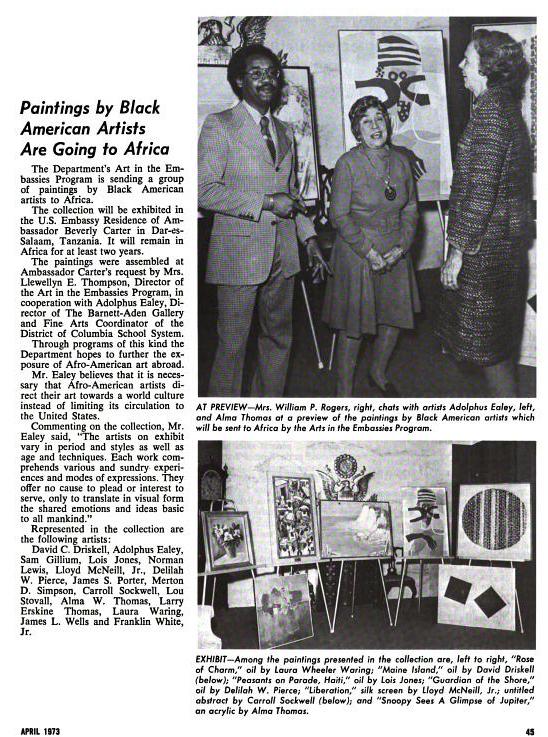 I am running a company to help promote and increase revenue for non-profit and for-profit organizations. View more posts

One thought on “Delilah W. Pierce Featured In Department of State’s Art In The Embassies Program”